We started our little trip on 2nd of March. We spent a week in Helsinki at our friends place. At 6th was our flight. Our flight was from Helsinki to London, and from London to Las Palmas. When we arrived in Las Palmas, we took a bus, first to the Playa de Cura and from there to Puerto de Mogan. Actually i was kinda suprised about the cheap prices of buses. I think it was about 6 or 7 euros or something. After we arrived to Puerto de Mogan we went straight to the our hotel. There we met our colleague Fernando who told us how we get to our place. It was kinda complicated, because they didn’t have the correct adress. But finally they called us a taxi and we finally got there. So, that was our first night in Gran Canaria.

On our second day, we slept very late. Then we went to look around our new hometown. Actually our biggest problem on first week was to find a bus stop. On our last week we were wondering that how was it so hard to find in a small village like Mogan. But in few days everything realy went okay. We had a one week holiday before we started to work. That week went really fast! Mostly at the beach and just wondering around.

My first day at work was from 1pm to 9pm and it went really fast. I don’t remember much about it, but they really didn’t let us do anything on our first day so it was mostly just watching what they were doing. On our first week we learned to make keycards, check ins and check outs. And we also learned some spanish words too. Sometimes working there was really stressy. Atleast when there was only spanish guests, but i think it was a good way to learn to handle stress. Mostly there was guests from German, Norway and England.

I really liked our colleagues. There was Irene from Norway, Simona, Heike, Marina, Linda, Fernando, Silva and Octavio. They were really nice and friendly. And also patient. Of course they helped us in everything we needed, but they also wanted to make us feel comfortable and that we are welcome there.  I also made one check-in al by myself and i think it was really scary because there is so much what we need to know and remember but it went quite ok.

This is the picture of our flight to London. 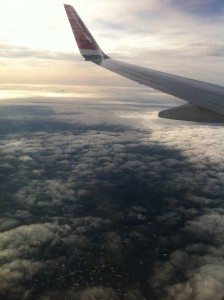 There was some “not so nice things” in our hotel too. For example there was two hotel manager, Marina and Heike. And there was some problems with the communication. One day i asked Marina that can i leave litte earlier because there was nothing to do. And i also told her that i can come some other day when there is more arrivals. She told me that i have to come on saturday. On saturday when i went to the hotel, Heike said that i don’t have to work and that i should go to the beach or something. Next day Marina asked me why i didn’t come to work on saturday so i told her that Heike said i don’t have to. And i think she got little upset about it.

But other than that everything went quite okay and we started to open up and even relax a little bit. On our last week at work, Silva told me that we shoud try to talk only spanish. It was really scary but fun.

Our job at the hotel was basically help others. We did the keycards, check ins, check-outs and helped them with the drinks and stuff like that. There was never a boring day and everyday was different and we learned something new. 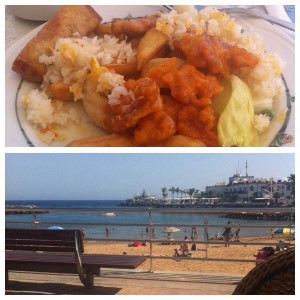 I think i did pretty good, but there is still lot more to learn. Are colleagues told me that im very good with customers because im social and very open person. And i also think that the customers liked me too because of that.

I also wanted to make customers feel themselfes comfortable so i tried to talk with them as much as possible. For example i asked them that “how’s your day been?”. But im also really impatient sometimes. When something doesn’t happen right now, i get frustrated and lost my nerve. But what comes to professional ethics, everything went okay. I followed the rules fine and they never had to tell me that i have done something wrong.

But there is pretty much everything that i can tell you. I hope that this report is okay to you. I don’t know if there’s enough text.