Oh, my what a week I’ve had. When I went to bed on Sunday evening I was pretty sure that I would toss and turn because that’s what I normally do if something new and exciting is happening the next day but no, as soon as I put my head on the pillow I was out. It must have something to do with the fact that I’ve been talking English and listening English that exhausted my brain, so that I literally had no energy to worry about the next day. I started Monday morning at 9 am at Chichester College and I was due to wait at the reception and because this is me, a person who is on time pretty much all the time. I was there sitting and waiting at 8.30 am. I must have looked lost, confused and nervous because the ladies at the reception asked me if I was alright. So then they called to see if somebody could  come and collect me, meanwhile they took my picture and gave me a visitors card, I even showed them my ID so that they would get my name right on the card, but it ended up reading; Netta Anniina 😀 Anyway, so finally somebody came and picked me and we went to straight to HR (human resources) to see if I could get I proper staff badge but unfortunately they didn’t have all the information to do that. 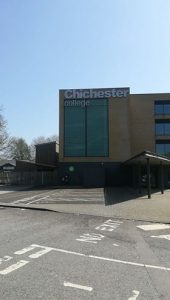 I was taken to the Business and Management department where I would be working for the next 8 weeks. I was introduced to this lovely woman who would be my “tutor” and she took me through the office explaining what they did and who everybody was and it all was so much that I couldn’t remember the half of it. The office was real British, full carpeting and fire proof doors everywhere and instant coffee. 😊 I must say that I was overwhelmed of all the information I was getting, but I was still very excited. Before I realized the time had gone by so fast that it was lunch time, which in here starts 12.30 am. I was told that they really don’t serve healthy food, so I had packed my own lunch, but I still went to the cafeteria with everyone else because apparently that’s where people eat. I could have bought salad, or a sandwich and a bag of crisps which seemed to be very popular here or I could have bought something from Subway. Yes, they have Subway, at school. I know it’s unfair, the aroma of it every morning is almost intoxicating. In the cafeteria there was also a Costa, where you can get coffee and then the real diner which servers different kinds of food. I haven’t even checked out what they serve, but I saw that you could get at least pizza and Mexican food.

The first day was very overwhelming and I don’t even remember much of it, I was just so tired, my brain was so tired that when I got back home I just sat down and stared into nothing like a half an hour. I was so tired that I just had something to eat and went to bed and fell asleep immediately.

I haven’t yet gotten my login, so that I would get a computer and really start doing my job, but I was told that I would get it on Friday. I don’t mind thought, I like an easy/slow start and it takes time for me to get the hang of it. I have been doing some archiving, and getting the mail, laminating, photocopying and scanning and answering phone calls and all sorts of things. I’m sure that I will enjoy working there.

Besides being super tired (I’m so hoping it’ll pass because it’s rather annoying) I literally haven’t done anything interesting. Well I did go to gym with Kim Wednesday morning before work (I know, I wasn’t clearly thinking!!) and then running today, I’m really liking it here and I could see myself living here, all I would need would be my husband and my dogs.

Tomorrows Friday and I’m so thrilled! I cannot wait to let my brain take a time out. I’m just going to explore the city, get to know the buses and find a nail salon to do my nails and I might pop into a pub. Oh, and I learned a new word. Pigeonhole! It means those letter boxes that some offices have, when I first heard people saying to me; could you pop that into my pigeonhole, I was like what, where, whose hole?? Anyway, now you know it too!

Have a nice weekend everybody and see you next week!