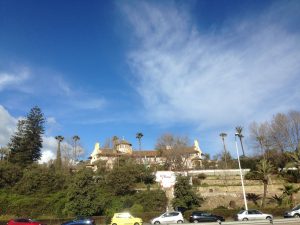 Today it`s raining here in the sunny Spain so we can take a look to the history of the Hotel Reina Cristina. 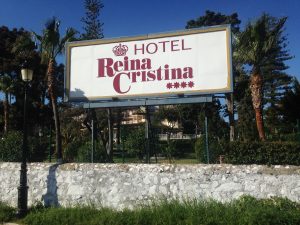 The Hotel Reina Cristina was founded due to the construction of the railway between Bobadilla and Algeciras in 1890. It was named after Queen Maria Cristina, mother of Alfonso XIII.  It is the oldest hotel on the Costa del Sol and it is one of the most reknown in Spain.

The Government comissioned the construction of the railway by the British company “Henderson Administration”. Sir Alexander Henderson, a wellknown philanthropist who was later granted the title of Lord Faringdon by Edward VII stayed in Algeciras and liked the region so much that he decided to build a hotel next to the railway station. The British architect followed the British style with some Spanish details similar to the Hotel Reina Victoria in Ronda.

The Hotel was inaugurated in 1901 and subsequently started a long history of distinguished clientele including Spanish and international aristocracy and personalities. In 1928 the Hotel Reina Cristina was almost entirely burnt down. Two years later it was reopened with more rooms and with an interior patio enclosed with glass. In those days it had four suites all named after the illustrious  visitors who stayed in them: “Maria Cristina”, “Alfonso XIII”, “Juan Carlos” and “Reina Sofia”. Nowadays it has two suites.

During the Spanish Civil War and the Second World War the hotel remained open and housed many German and Italian spies who controlled the movement in the Straits of Gibraltar. Many bathrooms were converted into dark rooms to develop films brought from Gibraltar.

Among many historical events which have taken place at the Hotel Reina Cristina was the International Conference of Morroco 1906, attended by representatives from France, Germany, USA, Great Britain, Italy, Russia, Spain and Morocco to negotiate the division of the latter into Spanish and French Protectorates. This Conference was atended by a young journalist called Winston Churchill!

Today ,the signatures of the famous guests are reproduced from the Golden Book on two plaques, one of either side of the reception. The King Alfonso XIII, the Sultan of Johore, Franklin D. Roosevelt, the Mariscal Petain, the Queen Elizabeth of Belgium, Maria Jose of Italy, Orson Wells, Lord Halifax, Sir Arthur Conan Doyle, Rock Hudson, Ava Gardner, these are some of the famous guests who stayed in the Hotel Reina Cristina.

What a hotel! But now it`s time for me to start working again.