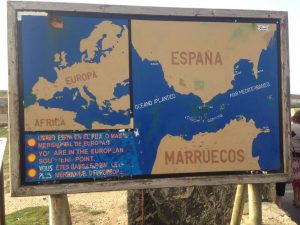 More to see here in Spain. An English tour operator, Saga Group  makes voyages to Reina Cristina. Their group leader invited me to their trip to Tarifa last saturday when I had my second day off.

It was an interesting half day tour, where we followed the coastline of the “Costa de La Luz”to reach the enchanting town of Tarifa. Situated on the southernmost tip of the Spanish peninsula it is the only place in Spain where you can enjoy both the Mediterranean and the Atlantic Ocean. It is one of the most attractive destinations for historians and windsurfers alike.

Tarifa was founded by the Arabs who converted the city into a giant fortress in the year 710, and, being in a strategic position of defense, from there they controlled the Strait of Gibraltar. In 1295, Alonso Perez de Guzman, the mayor of the fortress city, built a castle and strolling around the historical part of the town. There you could see the Arab influence of fortress walls and towers. 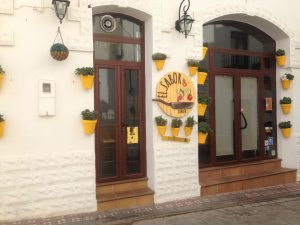