First I like to  say ”sorry” about that this is going to be long text because here is so much things what I like to tell ! 🙂
So at the second week I has lots of tours all around in Spain and that was so awesome ! I had seen so much incredible thing here and visit the most beautiful places. Its hard to believe that this is working 😀 After all those trips I had only one thing to say ! I really had done good choice when I choose my profession.
So next I will tell you something about those trips; 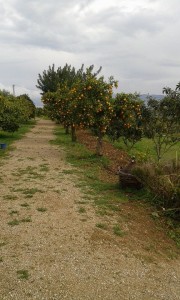 Los Naranjos tour.  So in Los Naranjos where they grow up different citrus fruits and the farmer, Juanito Orange tell us about his working days and what he needs to do on farm. We also got to taste every fruits in farm and we heard a story how them grow up. 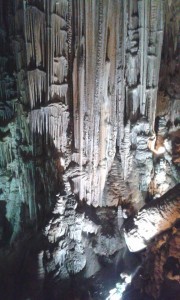 City tour in Nerja.  There we visit in most incredible caves where was biggest stalagmite pillar its also  guinnes world record pillar. After that we went in viewpoint named ”balcony of Europe” there was amazing views over the Mediterranean sea. After that we have some free time in Nerja city and the first thing we visit in small village named Frijiliana it was in the hills and there we tasted some sweet vine. 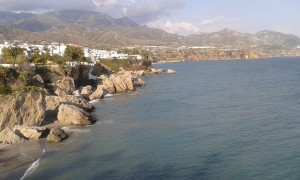 View at balcony of Europe 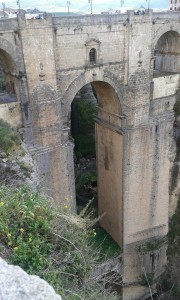 Next day i were in Ronda its one of oldest town in Spain. Ronda is known about bull fighting arena and the big bridge. So there was like two side, the new city and the old city. There we see the Puente Nuevo Bridge which is divide the old and new city. In the trip we had a city tour and the guide tell us about Ronda and we also visited in old spa where we see video which had telling about old spas. Then we visited in real bull fighting arena and there in the museum what was full of old matadors clothes and matadors weapons. 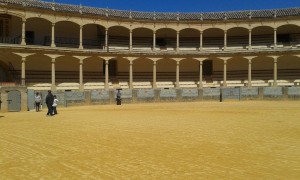 That was amazing ! actually how many people has visited in real bull fighting arena?!  After that we have some free time for shopping, eating and looking city. Last thing we made was visiting in cave which was high in mountain, the cave is very old and there were live cave men before Christ. The cave was very dark and the guide gave us lights so we can see the all drawings on the walls what I actually had seen only unrealistic in movies.  That was so awesome that I never forget it ! 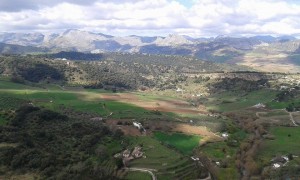 Views from Ronda
At Friday I spend day in school which help me to get this workplaicement. School was named Ave Maria and it is in town. It was nice to meet those people! The Easter week is coming (holy week, Semana Santa) and its pretty big thing in Spain, so the Ave Maria school is also going to join in the parade so they practice their procession at Friday and it was awesome ! Also teachers show the school and tell about it for us.
Easter week… (or Semana santa how local people say) 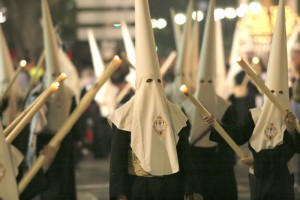 Now we have past the holy week and like they already tell me, that was incredible thing here in Spain. The city was full of people and they celebrate and play the music 7 days. I visit couple times in city but then I realize that Spanish Easter mind be to much for this country girl. But even the Semana santa was too much for me but also I enjoyed very much to see other culture because it was pretty different if you compare it to the Finnish Easter. 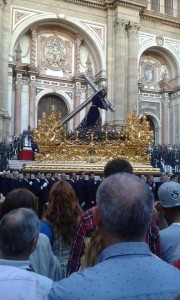 Easter week in working place was pretty silence and peaceful and I was working in office those days.  Then I have long Easter holiday, 6 day off. That was nice when I had lots of time to get know the city and make some shopping also, but it also good to be back on workplace and return to everyday routines.  On this weeks I had helping other people and also do marketing.
Marketing means this time that they also want me to write some blog text for them about what I do when im working and they publish it on they own websites where people can read what its going to be if you want to come do your training here. And because im lil lazy I write this one head text and edit it little and copy, paste it thats why everything in English and im sorry if there is some mistakes ! 😀
(Those arks weight many tons and they have always like 60-80 carrier even in smaller)